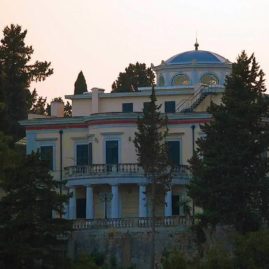 Mon Repos Palace is a neoclassical building in the east part of Paleopolis, Corfu’s ancient city.

Built in 1830 by the British Commissioner Sir Frederick Adam at the beginning of the peninsula of Kanoni opposite the ruins of Paleopolis. A nice building but not as big and magnificent as the Achilleion palace.

It has well-laid out gardens surrounded by the old Greek monuments of ancient Corfu and spectacular sea views of all the eastern coast of Corfu island.

Sir Frederick Antam was one of the most sympathetic commissioners of the Ionian Islands, as he did many infrastructure projects, including this building in Corfu as a gift to his Corfiot wife Nina Palatianos.

Later and throughout British rule, the palace was used as a summer residence for the commissioner in charge.

According to the union treaty of the Ionian Islands with Greece, the building was to be given for use by the Greek royal family.

And indeed, After the union with Greece in 1864, Mon Repos was used as their summer residence, until the abolition of the Greek monarchy in 1973, when the Greek government considered the palace as public property and turned it into a museum.

The former royal family appealed to European courts, considering this area and two others north of Athens as its property, but all it managed was a small compensation and the issue is finally closed.

Worth mentioning that Prince Philip of Greece, later Duke of Edinburgh, and husband of Queen Elizabeth II, was born here on June, 10th, 1921. But except for a front plaque at the entrance, there is nothing else in the building to relate it with his birth.

Mon Repos Corfu as a Museum

Today Mon Repos palace belongs to the Greek state and it is used by the Municipality of Corfu, mainly for authoritative or festive meetings.

Mon Repos has been transformed into a museum and a historic place with a large park full of archaeological treasures that can be visited by all.

It is an ideal place for pleasant walks under the shade of very large and old trees.

This museum is open to the public on weekdays from 8 am to 7 pm for a small fee of 4€ while there is usually no charge on weekends.

Also, you can buy a combined ticket which includes visits to Mon Repos, to the Asian museum of art in Corfu town, to Achilleion palace, and some other places simultaneously.

There are buses connecting Paleopolis with Corfu town every 40 minutes but the distance is small and can be made on foot in just 15 minutes.