Benitses maps in large size showing in such detail all small roads, paths, and landscape, this map of Benitses is the only one that exists in such a size.

All maps are tourist maps in Greek and English, they can be opened in new windows when clicked.

Benitses village as the Benitses map shows has it’s north limit at the junction of highway Lefkimis and the Corfu-Achilleion Street and ends at south in Tsaki area where the Achilles hotel is situated.
Crossed as shown on the map by the coastal highway, there are some cross-streets leading to the old village, to the mountain villages of Stavros, Agioi Deka, and Gastouri.

The road that leads to Stavros village starts from a point at Chontrakia region, it is extremely steep for the first 2 km, winding and narrow, but then things get better and only the turns remain.

There is another road that starts from the entrance of the old village, crossing and passing beside the aqueduct where is divided into two paths, the left path leads to the mountain village of Agioi Deka and the right to also mountain village of Gastouri, it reaches Gastouri at the building of Philharmonic society.

This road, especially the track which passes through the old village of Benitses is a problem.
The road width does not exceed 2.5 meters and passes between adjacent houses, so if two cars are meet one should make back even 500 meters.

Countless cars have left their footprints on the walls of houses, in a corner a metal bumper is placed to protect the building.

During the summer with the increased traffic where foreign visitors do not know the street narrowness, the situation becomes grotesque if not unacceptable, it is a road difficult even for pedestrians.

In some electronic navigators, this path is indicated as the main road, this is wrong and needs to change.

The mountain roads from Benitses to Agioi Deka and Gastouri are extremely narrow and dangerous, they are used with great care and only in case of emergency, they are offered only to serve traffic between the inhabitants of the three villages, and only for this purpose.

A road map of Benitses

A map of Benitses including Tsaki area at the south

To open the maps at full size, right-click on the map and (open in new window or a new tab) 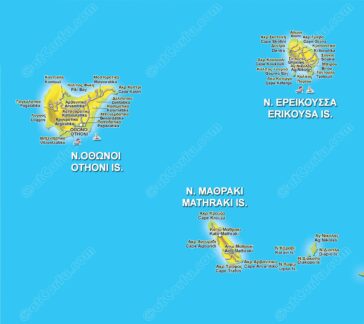 Map for Petriti and Boukari. These are two small fishing villages on the East coast of Corfu, about 20 miles from the town.… Read More This is a large detailed map of the Sidari wide tourist area, from an area near Roda up to Peroulades.… Read More A map of the Kavos area. The most popular tourist destination on the island among the young British tourists because of its rich and notorious nightlife… Read More A map for the tourist area of Messonghi and Moraitika on the southeast side of Corfu. Some of the most touristic development villages of Corfu, with the only sandy beach of Corfu’s East seaside.… Read More Benitses maps in large size showing in such detail all small roads, paths, and landscape, this map of Benitses is the only one that exists in such a size.… Read More This is a new Map of Corfu island in Greece, all names in Greek and English language.… Read More This is another map of Corfu old town… Read More Here is the wide area of Benitses on a map from the north entrance of the village at Pounta akra down to Tsaki settlement.… Read More

A road map of Corfu with all main, large, and rural roads and paths, as they are today.… Read More A large map of the town of Corfu with emphasis in the old part of the medieval town at the east of the peninsula.… Read More A large map of Corfu island, with all details, and roads, updated every year.… Read More