Halikounas beach may not be the most beautiful, after all this is relative and according to everyone`s tastes, but it is definitely the largest beach in Corfu.

A strip of sand in southwestern Corfu stretches for several kilometers between the open sea of ​​the northern Ionian sea and the Lake of Korission, in some spots it tends to thin and in others, it becomes quite wide.
Halikounas beach is enormous, endless, with variations in the landscape, with a forest, a lagoon behind the sand dunes, and above all, it is pristine – no hotels or uncontrolled tourist development.

This part of the island looks like the Sahara desert in Corfu.

It is located in southwest Corfu near the village of Agios Mattheos of which is a part and at a distance of about 17 miles from Corfu town and 16 miles from the airport.

It has brown fine golden sand and permanent waves, perfect for sailing and water sports.

Because of the Korission lagoon, it is a protected nature area, it has no hotels or restaurants, there is a canteen in the middle of the beach but for those who want to spend some unforgettable hours, there is better to bring with them all they need.

It is a beach that caters to adventure enthusiasts, those who love sailing, surfing and are not bothered by winds and waves.

Adventure can occur all of a sudden even on the bumpy alley that runs alongside and behind the beach, for example, your car can be stuck in the sand.

It has happened to us many years ago, but we managed to get out of it by using rocks under the wheels, rocks that happily are not missing.

The landscape is wild, virgin and does not look like the rest of Corfu, it is like a desert on the most fertile island of Greece, there are cactus and dunes reminiscent of the Sahara.

In addition to water sports such as water skiing and paragliding, mini-motocross races are often organized, the up and downs of the ground are helping.

Halikounas is a beach that you definitely must visit, you will feel closer to nature and you will easily leave behind your flat everyday life. 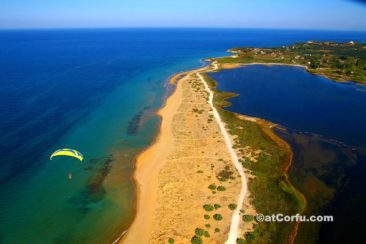 Biking on a sandy surface like that of the sandy beaches in Corfu, is totally different from cycling on peachy roads… Read More Rovinia beach is a small, remote, beautiful, and unspoiled beach in west Corfu. It is considered the most beautiful beach in Corfu.… Read More The most popular beaches of Corfu, as voted by you among the unnumbered beautiful sandy or pebble beaches in Corfu island.… Read More

Next, to Korission lake, a small cedar forest between the large sandy beaches of Chalikouna and Issos.… Read More 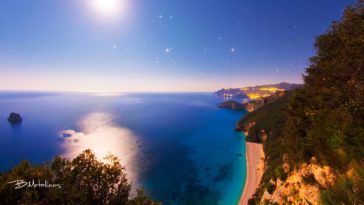 Gardenos beach is situated in the southwest end part of Corfu, it is the beachside of the traditional village of Vitalades.… Read More

The wide golden sandy beach of Santa Barbara in the southwest of the island of Corfu.… Read More

The large golden sandy beach of Marathia in southwest Corfu, many miles of sand stretching down south up to the cape of Arkoudilas.… Read More

Issos beach in Southwest Corfu lays just south of Chalikounas with Korission lake in the background and St George to the south.… Read More

Halikounas is several kilometers of sand in southwestern Corfu, between ​​the northern Ionian sea and the Lake of Korission.… Read More