At the southern edge of Corfu, opposite Paxos, we find the cape of Asprokavos and a little further north on the west coast the cape Arkoudilas.

These are virgin areas without tourist development, thus unchanged for hundreds of years a natural landscape consisting of a series of high cliffs parallel to the sandy beaches at the edge of southwest Corfu.

More interesting is Arkoudilas (the name means bear-area), which now is an uninhabited large forest area of ​​about 250 acres with cypresses, lawns, and shrubs, some olive trees are not missing though.

Some hundreds of years ago there was a kind of tree called bear-tree as it was mentioned in old contracts of the area.
So it is speculated that this tree gave its name to the area since bears never existed on the island.

The area was inhabited once, there were buildings right on the top of the hill, that is, at the highest point of the forest area that belonged to the owners of the houses.

Owners during the Middle Ages were the Quartano family, Latin nobles written in the Libro d’oro, and this area was granted as a timario by the then Venetian administration of the island. Timario was a piece of land given as a price to a wealthy family to protect it from the frequent raids of pirates and others.

Quartano family had built at around 1700A.D the monastery of Panagia of Arkoudila and next to it a tower with loopholes and all the necessary buildings both for the protection and defense of the monastery and the area.

There were residences for the owners and monks, warehouses for items like oil and wine, stone wells, and secret emergency exits with stairs leading to the beach when they had to escape pirate raids.

The old people remember that the monastery was celebrated on the fifteenth of August when a great feast was held here,  the faithful climbed the hill on trimmed horses and in the afternoon a feast and popular dances were following.

The point where the buildings existed had the best view, from there they could see both Paxos and the entire area of ​​Lefkimi up to the old fortress of Corfu.

From all these buildings there are only traces left today, due to the isolation and ferocity of the area and despite the efforts of the owners, the buildings and the monastery were looted several times until they eventually collapsed.

The beaches between Asprokavos and Arkoudilas are not easily accessible due to the high cliffs that cut them off from the inside and simply constitute a wild and beautiful landscape, they are golden sandy beaches visited mostly by the locals from the surrounding villages.

But let’s focus a little on this beach of Arkoudila.

It is the most remote, the largest, and most majestic beach in the most dramatic and wild landscape of Corfu. Literally, it’s an exotic paradise.

Due to the difficulty of access but mainly the large distance from the center of the island it has remained untouched by humans, this is fortunate.

Therefore, here nature creates masterpieces on the sand and rocks, with galleries and strange erosions, away from human interaction.

The dramatic and majestic landscape with the towering cliffs, bare on the seaside, but green on the other, combined with the huge golden beach shaped and painted by nature, make it, in our opinion, the best beach in Corfu, without any exaggeration.

And one of the nicest beaches in Greece.

However, it is not so well known as the Navayio(shipwreck) beach of Zakynthos because it did not have the luck (or the misfortune), I would say, of a smuggling ship to sink here.

The Beach of Arkoudila, however, existed for centuries and will still exist when the Navagio of Zakynthos, due to the landslides, will disappear.

In conclusion, I would say that anyone who has not visited Arkoudila beach, will not get a correct and objective image of the unique Corfu landscape.

Asprokavos is the southernmost cape(Kavos) of the island, named after the steep and tall white(aspros) rocks that can be seen from far as someone approaching Corfu from the South.

In Arkoudilas, the waters abruptly descend while in Asprokavos more abruptly.

Throughout the area and due to the open sea waters are almost always tinged and some strong underwater currents are present, so some attention is necessary.

Let`s make clear that the beaches here are not suitable for families but only for adventure enthusiasts.

Some photos from the area 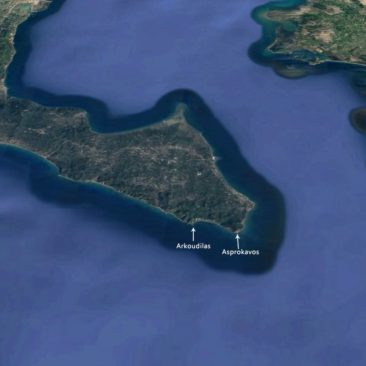 Arkoudila bay Beach with majestic rocks
Did this post help you? Share it with your friends! It can help them too!