In Benitses there are some very old and beautiful buildings, some of them more than 5 centuries old.

We tried to collect as much information we could about the most important of them, it was really difficult as most old people who knew about are dead, and the living ones are so old that they can’t remember much or strangely don’t want to talk about.

Here is what we have learned about these houses with the promise to add as much information as we can in the future.

The tall building at the entrance of Benitses old port

This beautifully tall and slim neoclassical building was built right at the banks of the river that embarked at the old Benitses port when the main road that leads up to the old village was a river.

It must be older than 4 centuries old, but details from its early history are not known.

Owners during the early 20th century were the three Vandoros brothers, Memas, and Aggelos who were traders in Corfu’s Jewish sector, and Spiros who was a lawyer.

EDES, a rightwing partisan group leading by Napoleon Zervas, had its headquarters in Vandoros building from 1945 to 1949, just after the war.

Serafim was a priest living in Messonghi, who later became Archbishop, he was a member of this rightwing partisan group of EDES, he used to go around the area always riding on a horse.

In the same building, on the ground floor, and after 1949, the traders Matios and Likouris open a general commercial shop, they sold potatoes, onions, etc. Οnce they have been ripped at the area of St. Jonh of pigeons by a gang of Greeks from southern Albania, their leader was the grandfather of today’s a hotelier in Corfu.

From 1953 to 1958 the ground floor was a barbershop run by Yiannis Kontos(Bourelas) and from 1958 to 1971 was one of the two kafeneions that existed in Benitses before the 80s.

This was the kafenion Skaloma named by the name of the area, indeed the area around the port and at the seaside is called Skaloma.

Today the building belongs to Bellos family as they buy it in 1971 from Spiros Vandoros.

The Grapevine Restaurant of Nikos Bellos, or else Klimataria, is operating today on the ground floor.

The other building of the photo – Finanza

The other building of the photo doesn’t exist today, it was called Finanza back at 1941 and used to be the headquarters of the Italian occupation army, many members of the resistance were severely tortured inside this building. Later it became a restaurant owned by Stefanos Kefallonitis until it was demolished before 1974 when the square of Benitses and the new road constructed.

The building of Township

This house was built almost 3 centuries ago and owned by an Italian noble named Palaviccini.

Later it became the property of Varvitsiotis, a family of famous notaries, and after the death of the last family offspring, it was donated to the state for public use, It is known today as the Varvitsiotis Legacy.

In this building were always the offices of the local municipality, many years ago in a small office at the backside of the building while the rest was used as a customs office.

The first customs officer was someone named Harilaos Pateras, during his duty here he married Lina Kouris, a local girl from the wealthy Kouris family.

The custom office moved to Corfu in 1962.

From 1962 to 1965 a school for young women was working in the building, most of these girls were coming from other villages all over Corfu.

Yes, it sounds strange now, but in Greece of the 60s, there were schools teaching young girls how to become good housekeepers.

This school in 1965 moved a few yards further north in another building for few more years until it permanently closed down in 1972.

Girls were living inside the house and many of those met and got married to men from Benitses.

Today the first floor of the building belongs to the municipality and also houses the offices of Benitses Cultural association, while the groundfloor is hired for commercial purposes.

The building of Pagiatis family

Built by an Italian, later the owner was another Italian named Palermo.

Then the Pagiatis family stayed there for more than 4 decades and the house today belongs to them.

In this new photo, the house is completely renovated and different from the original building. 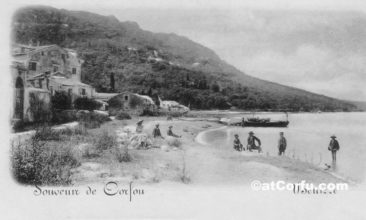 Kotsoris in the fishing boat 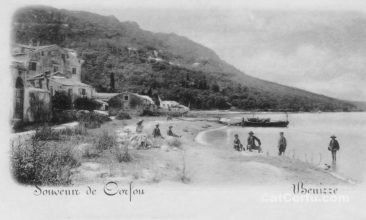