History of Benitses begins when it was first inhabited,
This was in ancient times and was because of the abundant freshwater springs  with which the area was favored. It is estimated that 80% of the water in Corfu is in the hills here, stemming from the limestone rocks of the mountains of Stavros and Agioi Deka which surround the valley.

The ruins of Roman baths and other finds demonstrate that not only was it inhabited but that it was also a particularly important part of the island.
At the period of the British domination of the island, the water springs here were channeled and an aqueduct built to provide Corfu Town with water, but the Romans almost two thousand years earlier had created something similar, their persistence in building projects such as aqueducts, roads, etc.  is famous.
In 1269CE Charles Anjou, the French King of Sicily, occupied the whole island of Corfu, hence followed the ‘period of Anjou,’ it was then that the island was divided into four departments-regions called Gyrou, Orous, Mesis, and Lefkimis respectively – names that are still in use today.

In the battles that took place then were also ships from Genoa.
One of them sank off the old fortress and all the surviving sailors swam ashore.

The conditions of the time did not allow them to return home and so they remained on the island.
One detail, the Genoese captain was called Spinoula, and all the sailors were named after him by the local people, and finally, they all ended up with the surname Spinoulas.
This is a story regarding the origin of the many Spinoulas families around the island, which we have no reason to doubt because it was told to us by a member of the Spinoulas family!

In 1537 the Turks in one of several failed attempts to seize the town of Corfu took 20.000 men from the rural areas prisoners and sold them as slaves in the slave markets of Egypt and Constantinople.

This was a massive humanitarian disaster and nearly caused the extinction of the island population,   the countryside was devastated and there were not enough people to cultivate the land and tend the olives which were the main product of the island.

The Venetians saw the danger and gave privileges and land to those from the Ottoman occupied Greece who wanted to come and settle in Corfu.
So a wave of immigration was created, mainly from Epirus, mainland Greece, the Peloponnese, and even Crete.

The vast majority of residents of Benitses come from those who settled here at that time, the names with two syllables as Zochios, Bellos, Boikos, Kontos, Nastoulis, etc.. come from Epirus and especially an area called Souli.
The name Moraitis is from the Morea (Peloponnese),.

Many others whose names end in ..opoulos came from the Peloponnese and others from the island of Crete.

Most of the present inhabitants of Benitses (about 70%) have their distant origins from Epirus.

Origin of the name Benitses

There are several theories about the origin of the name, and many resemble the folk tales told by older people.
One of them says that the name belonged to a pirate who came to admire and loot the village, while others say that the pirate`s boat was called Benitses!
This theory is more like a legend that has little to do with reality, but it adds color to our history.

The true origin of the name Benitses is clearly shown in official government documents from the period of the Angevins and before the Venetian period when even in the 13th century the area was referred to as Penitisai, a word derived from the Ancient Greek word “Penio” that means a place that has rivers and is generally rich in waters.

Indeed Benitses is rich in water and used to have two small rivers which reached the sea where the harbor is now.
Later the name Penitisai changed over the years into Penitsai and finally into the current Benitses.

Benitses in the 20th century 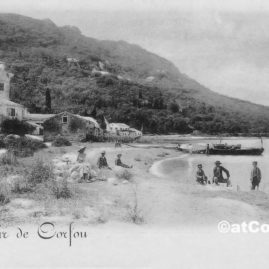 So the people settled on the banks of the river during the Middle Ages, and this river and its sources helped them survive and flourish.
Millstones were built near the springs and the river was used for the boats that went to the Mills carrying flour and olives from all around the coast of Corfu.

Much later, in the early 20th century conditions changed, the mills did not produce enough and were not able to feed the growing population.

So residents turned to fish and the river passing through the village was a hindrance, so they blocked the flow in the riverbed and the river followed another direction and now flows to where the hotel Potamaki, is today.

The old riverbed was turned into a road which is now the main street of the old village.
It’s not possible to see the mouth of the river (Trafos in local dialect) today because it has shrunk that much that you pass it without noticing.

The life and habits of inhabitants changed radically with the advent of mass tourism that began in the 60s and reached a peak in the 80s.

Today Benitses is in a transitional period, trying to attract discerning visitors by upgrading the infrastructure whilst preserving the traditional style which it has never lost.

Most residents are involved in tourism but do not forget the tradition of fishing, especially in winter.

The young people today have a very different professional approach because they see that tourism is not the only option, they have traveled and studied, many abroad, and come back with a wide range of qualifications, a world is open to them that their grandparents could not possibly have foreseen.

In Benitses there will always be fresh fish sold often still alive as they come out from the sea …
The sea here is full of the sea plant “Posidonia”, this might not be liked by the swimmers but the plant is responsible for the abundant supply of especially delicious fish, as well as the great clarity of the sea.