Corfu is a lively cosmopolitan island, with 120,000 permanent residents,  and comparing population and size it is the third most densely populated part of Greece after Athens and Thessaloniki.

The Corfiots are cheerful by nature and love anything like celebrations, so it is natural that festivals and all kinds of cultural events such as theatrical performances, art festivals, concerts, festivals, etc. happen almost every day, especially during the summer months.

It is beyond the scope and purpose of this website to tell you about all the special events planned annually in Corfu, but we want to mention that this year alone there are more than 50 performances and ‘happenings’ scheduled for August in different parts of the island, plus over 100 plays and seminars on theatrical subjects, 30 photography exhibitions, 22 art exhibitions and we do not even include the numerous festivals and local events in each village, or the frenetic nightlife of Corfu …

The truth is that visitors need to be fit to be able to follow the everyday life of Corfu and need much longer than 15 to 20 days to get an idea of the infinite variety of this island.

The Ancient celebrations in early spring that took place in honor of Dionysus, god of wine and fun, hoping for a good harvest and successful husbandry are the forerunners of today’s carnival in Greece.

Here in Corfu over the years, the celebrations gained a strong Venetian influence that makes today’s Corfu carnival completely different from those in other parts of Greece, it also demonstrates the innate zaniness of the Corfiots and shows their creativity

Costumes were worn, and the floats, are influenced by medieval pageantry and exuded an aristocratic Venetian “air”.

The satires of absolutely everything are scorching, especially the satires of the politicians, both of today and of the past.
Discretion and conservatism are unknown words and revelry continues in both the city of Corfu and the villages where they still maintain many unique customs that you can enjoy watching.

One of them is the famous custom of Venetian marriage, sets and clothes of the era bring the atmosphere closer to that of the middle ages.
Floats parade through the streets during the parade on the first Sunday of the Prodigal Son and also on the last Sunday of Carnival, when the King of Carnival is burned, among other characters that exist only here are the “Ntotoroi” ( doctors), the “nodaroi” (notaries) useful in reading the will of Carnival, and the “Muzeta” that is our name for the carnival masks which give anonymity.

The masqueraders cover the whole of their face with Muzeta, they are unrecognizable, they go anywhere and tease people without showing any mercy to their victims.
On the third and last Sunday of the carnival, the parade ends with the final burning of King Carnival, with the symbolic burning of all evil and the nodaroi accompanying him read his will that is usually full of innuendos aimed at politicians.
This is followed by a celebration with dances and songs all night.

2. The Corfu event of Petegoletsa

On the last Thursday of the carnival, Corfu has revived a very old tradition, an integral part of the Corfu carnival, which dates from the years of Venetian rule,  it is called the Petegoletsia, petegolia are simply the gossips, which means exactly what it says.
It is a popular street theatre that takes place in public, between the balconies of the old city along the narrow alleyways.

In these ‘gossip plays,’ the women come onto their balconies and gossip to their neighbors, making sly comments about recent events and also about the laundry of the other people, these are all played in the original dialect of Corfu and in a libertine language and style that would make even Aristophanes blush.

It is the famous indiscretion of Corfu which was misunderstood in other parts of Greece, but here it is completely different, the Corfiots routinely use this phraseology many times in everyday social life, it helps to halt misunderstandings at a low level, giving a chance to let off steam and avoid the use of force.

The Petegoletsia are watched every year by thousands of people, they satirize politicians even by exposing their personal lives and scandals in public, both at the national and local level.
Local MPs, mayors, and other public figures have to listen and at least pretend not to mind the jibes.

3. The Carnival in the villages of Corfu

As in Corfu Town so in the villages- the events of the Carnival are the same, plus a few villages have maintained some very interesting and entertaining traditions.

Until 1960  this was called Karnavalitikos marriage and happened in most villages, but it is now preserved only in the villages of Chlomos, Marathia, Kritika, Giannades, and a few others.

It takes place on the Shrovetide Sunday, or Tyrinis, the men of the village dress the groom, shaving him and decorating him with cologne, but also with ashes from the fireplace.

In another area, the bride, who is also a man, preferably with a mustache, will be decorated by the women of the village.
The fact that a bride is actually a man comes from the patriarchal influences that forbade women to participate in community events.

The ceremony also involved a demon in the form of a satyr who does his best to spoil the wedding.
Throughout the course of the ceremony, the villagers tease each other with endless obscenities.

5. The custom of the Vlachs

In the village of Argirades, Vlachs are the lords of the carnival.

There are only two of them and they dance one leading the procession and the other at the rear, the dance they do is an ancient Greek ritual dance.
They hold in their hands the blossom of the first Spring flowers and it seems that their mission is to force all visitors to smell the flowers.

6. The Dance of the Priests

In the village of Episkepsis, in the square of St. Basil on Shrovetide Sunday the Dance of the Priests is performed.
The priest of the village starts the dance and all the men of the village follow each other in turn according to their age and their social position in the village society, the chorus repeats the verse that the priest says without the accompaniment of music.

When the dance ends, the old women of the village follow on, and accompanied by the music they dance a local dance called Corfiot.
This custom only happens here and according to Mr. Klimis is a remnant of an ancient Maenad tribe dating from 500 BC as he writes in his book: the history of Corfu.

7. The festival of folkloric groups in Corfu

The festival of folkloric groups in Corfu takes place around the end of March every year in the Municipal Theatre of Corfu.
It is a festival involving folkloric groups from all over Greece who are both groups of adults and children, in recent years this festival has gained great prestige and hopes to become one of the most important cultural events of the island.

It has begun to attract bands from neighboring countries, as last year’s participation of groups from Albania shows.

8. Festivals in the villages

The different festivals that occur throughout Corfu over the year but mostly in the summer are endless.

Every village has at least 3-4 per year, so with more than 200 villages on the island, one can calculate that there are local festivals and celebrations almost daily.

We mention only the most important festivals and other events that attract the most people.

9. 40 days after Easter: The feast of the Ascension, at the Analipsis area in Kanoni.

10. May 8 and August 15: Festivals on the Assumption in Kassiopi and the Kanoni area.

11. 20th of May: Festival at Alikes of Potamos village.

12. May 21st: Konstantine and Helen feast in Koulines village.

13. May 21st: Achillian race with its finish in the square of Benitses.

16. June 24th: Day of Saint John, the festival at Mantouki and also in many villages with the lampatines festival where people jump over fires.

21. July 13th: Festival in the Sarocco square for Saint Spyridon.

22. July 20th: Feast of the Prophet Elijah in Magoulades village.

23. July 26th: Agia Paraskevi at Porta Remounta festival and a celebration in Benitses.

26. August 6th: Feast of the Transfiguration of the Saviour, in the Mouse island, Perivoli village, Strinnyla and Palaiochori, Agioi Deka and Agios Mattheos, and six-day pilgrimage from 1 to August 6 at the top of the Pantokrator.

27. August 11th: On the first Sunday of November, Palm Sunday, and Holy Saturday, on these dates 4 processions are accompanied by bands from all over the island.

28. August 15th: Festival on the fifteenth of August in the Monastery of Platytera.

29. August 16th: Gala weekend in the village of Kato Garouna.

30. August 23: Feast of Our Lady Odigitrias in the villages of Gastouri, Pelekas, and Agioi Deka.

32. September 14th: Feast of the Holy Cross at the monastery of St. John and in Sidari.

35. September 26th: Saint John the Theologian, a festival in Karousades and Porta Remounta.

Forgotten anything? Definitely yes, but it is very difficult to mention all the events going on on the island.
At the first opportunity, we will add the rest. 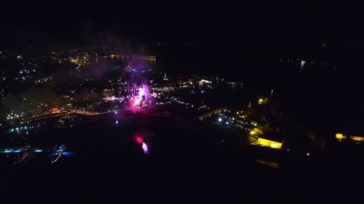 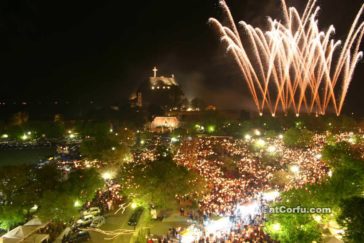 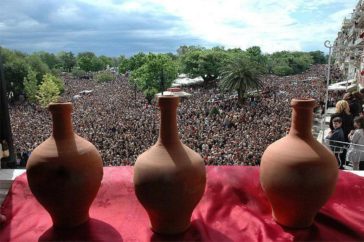 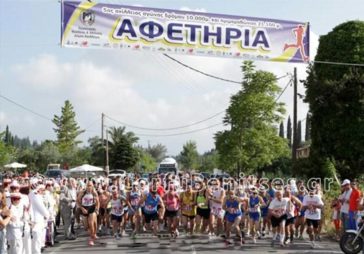